We were treated to a very comprehensive and helpful talk and demonstration on composition by Caroline, in which she outlined how to plan a picture, illustrated by examples by well-known artists from different schools. There followed two examples of assembling a painting, during which the choices and various techniques that can be used were demonstrated.

Before starting a composition there are several points to consider:

How to use colour

The Rule of Three (Golden Section)

Some artists put the focal point in the centre, while others use a triangle, commonly seen in religious works, with people scattered around. Abstractors often use a cruciform and sometimes the S shape. 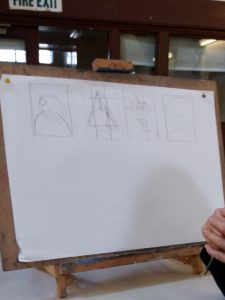 In the first picture – The Lady of Shalott by John William Waterhouse, she is central and the brightest, most detailed in the image. The dress is bright white and the belt a contrasting black. The line of the land runs parallel to her chin. 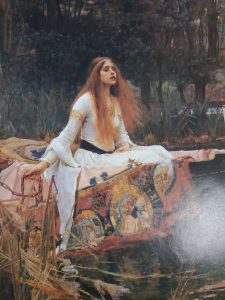 The second picture was a triangular placing, with no bright colours at the edge to keep the eyes inside the page. All lines point to the face. 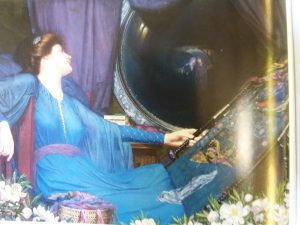 Isabella, by Holman Hunt is the third picture. Once again everything points to the face and there is little emphasis on any background. 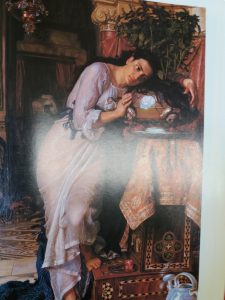 Ben Nicholson in picture 4 used constructionism. He liked everything to be within a “frame.  All the colours work together and “speak” to each other. All the lines are broken, so that the eyes don’t go off the page. He uses squares and rectangles. The placing on the page could be seen as related to Isabella, above. 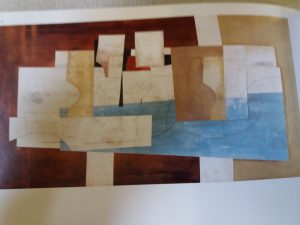 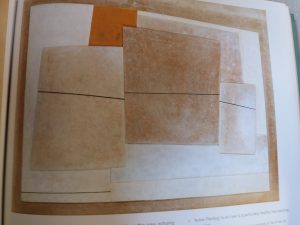 Picture 5 is by Karl Larsen, where there are many downward lines. Everything goes down to the table and stops the eye there. The woman in black is the focal point. Picture 6 is also by Karl Larsen and is unusual in the way the flowers are in front of the subject. There is a small amount of colour in the loom, but most are similarly pale, with the grasses bring the eye into the roses. Tonally, all dark tones are with the woman. 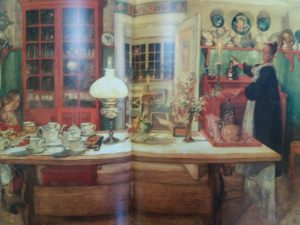 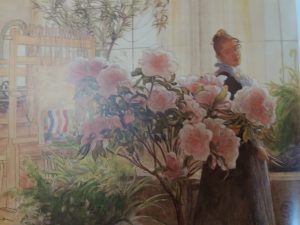 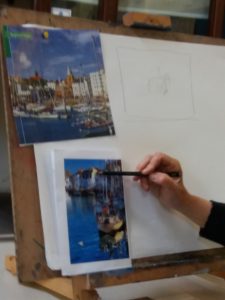 Caroline suggested using the internet for images to combine and make a composition. Draw thumbnail sketches before starting the work.  Houses can be moved in front of a church and boats can be moved across the water, with the masts making a pattern. Check the light source 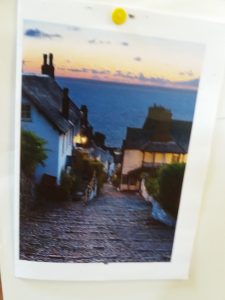 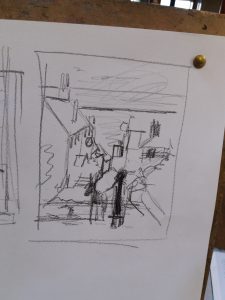 Using the photo of Clovelly, it was suggested that the house roofs are simplified and the greenery shaved off. This gives a cleaner line of perspective down the hill. The lamp can be moved to any position to alter the light source. The level of the horizon can be raised or lowered to balance the rooftops and the insertion of a person adds distance and a focal point to the composition.

When painting, do big shapes first and then smaller items.