On the 24th May Caroline gave us a talk and demonstration on “Pop Art”. She started by telling us that although we associate pop art with the 50’s and 60’s, it emerged as early as the 1920’s. Artists were reacting against traditional movements typical of the Victorian era as well as the upheaval of WW1. They were looking forward to a brighter future and this was reflected in painting and design. Caroline showed us a jazzy print of a number five that could easily have been designed in the 1960’s but was in fact created about 1920. Pop Art was also associated with Art Deco and the Dada movement.
After the Second World War artists again were looking at society anew and taking inspiration from consumer items and were commenting on the roles of men and women. Caroline showed us some more familiar images including Richard Hamilton’s collage of a man flexing his muscles while a woman sits on a sofa, surrounded by modern day trappings. Richard Hamilton was British but most of the artists we are familiar with were from the US, including Oldenberg, Lichtenstein, Rauschenberg and Warhol. Much of their work took a wry look at the superficiality of American life. Lichtenstein was inspired by cartoons and magazine images to make his paintings, such as a woman’s manicured fingers using a spray can or a high heeled shoe stepping on a pedal bin. He was also keen on using images of glamorous couples in sports cars, or macho pilots in planes with comments floating in speech bubbles.
Caroline took her inspiration from Lichtenstein’s cartoon paintings to demonstrate an idea for a take on contemporary life. Using a felt tip she drew a typical family out to lunch at a fast food restaurant, all of them glued to their mobiles and oblivious of one another. A speech bubble across the picture read “communication.” The session generated quite a lot of discussion particularly as we could relate to many of the art works that we were shown. 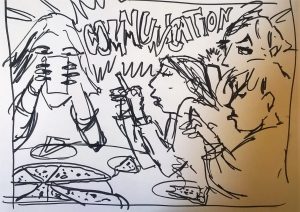