Markus Rothkovitz was a Latvian of Jewish descent. His family emigrated from persecution and settled in Oregon in 1913, where he started painting. In 1920 he moved to the New York Art School where he became anti-establishment and was influenced by Klee, Cezanne and Picasso.
Rothko taught children for 20 years. He liked the simplicity of children’s art. In the 1950s his art became completely abstract, using blocks of colour and influenced by the Fauvists. In the 1960s he used blocks of intense colour, following which he suffered from depression, reflected in his use of darker colours with less luminosity.

Demonstration
Caroline chose a thick first coat of yellow, then mixed Phalo green and purple as a compliment to the colour wheel. 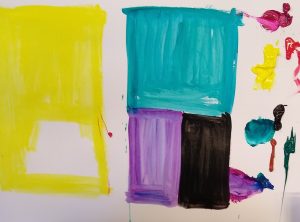 Then mixed an intense orange and placed it into the yellow square. 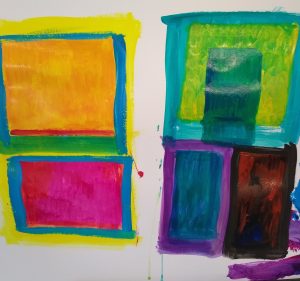 There then followed a succession of different choices of colour to illustrate the effect of one colour on another. 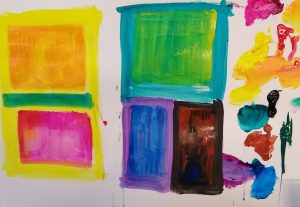