Caroline began with a description of the various brands and associated thinning agents:

Cobra is like System 3 acrylic, that is with less pigment

Lukas thinner is specifically for water based oils.

When using acrylics, it is often necessary to build with up to six layers to achieve the desired effect. However, the water-based oils will cover in just one or two applications. Caroline suggested that we underpaint with acrylic when outlining the image, and especially putting in skies, and then continue with the oils. The benefit of using this technique is that the acrylic draft will dry very quickly, allowing us to take up the oil paint. 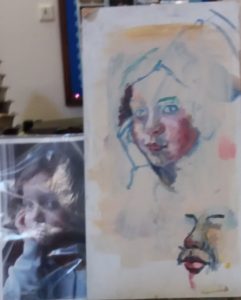 Starting with a sketched in image, Caroline mixed the skin tones, as below:

Apply the paint and allow to dry before blending. Using a filbert brush, to avoid angular marks, she painted over lightly, blending as she went, using skin tones and applying more than one layer. The oils proved much more workable than acrylics. 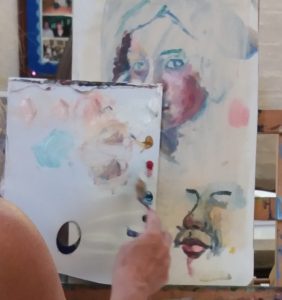 Using the darker shades for the cheek , Caroline then put some red into the nostril and made it darker further in. She used the lighter tones after the medium and dark tones are done. Working around the mouth, the coloured shadows were put in. For the eye, an off-white was used with a little re inner and a white rim above the lower eyelashes. A dark piece in the corner of the eye. The green for the iris was made of Viridian and blue. For the eyelashes, black was a mix of olive green +cadmium red deep + ultramarine. 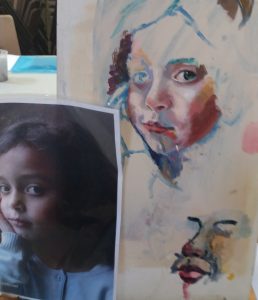 Caroline also suggested that we Google Sean Cheetham Mud Palette, which has some interesting images to peruse.

This was a very encouraging demo for those of us who have resisted using oils, for one reason or another. Not least is the possibility of avoiding the intrusive Linseed Oil smell!