Demonstration in Acrylics by Hashim Akib at St Helen’s Hall, Hangleton August 22nd 2015 Hashim Akib commenced the demonstration by showing us his preferred paints. He uses Daler Rowney System 3, heavy body colours from large tubes, which are reasonably priced and about a quarter of the cost of Golden acrylics. He piles his colours into a large, round palette with white paint in the central portion. His brushes are wide, flat ended decorator type brushes. He had a leaf-green prepared background on his canvas and was ready to start after showing us three photos, one of which we chose by a show of hands. It was an image of tourists walking down a Venetian street in bright sunlight. This would be his reference picture and he attached it to the left side of his canvas. The picture showed a large, historic building on the right with arched windows receding to further buildings with a tower in the background. Buildings on the left were undefined and cast in dark shadow. The figures occupied the centre foreground, reducing in size towards the farthest buildings and gave a sense of scale to the image. The sun cast deep shadows around them. Hashim Akib has a distinctive style, using large strokes with his flat brushes. He achieves lively, fresh paintings in bold, bright colours.

Hashim had not used this Venetian photo as a reference before so he took a minute or two to absorb it, then chose his colours to block in the main building. The warm ochre colour was achieved by mixing several colours on his brush and blended together. These included white, burnt sienna, yellow ochre with violet and blue green to give it some bite. He dragged the brush down the canvas in broad strokes indicating the angle of the receding building. The dark left hand structure was sketched as was the tower in the background. The road was given a light hue painted in the same manner and the figures were positioned with downward strokes in a dark blue colour, likewise their shadows on the road. He said he generally allowed himself about five minutes to get the image blocked in. At this stage no details are defined. Hashim talked about how he liked to link his colours together to give an overall continuity.

The next stage was the gradual addition of detail. The arched windows were added to the ochre building and the details to the tower were marked in. The pedestrians were given form and colour and background shadows were painted in. All these effects were achieved with the flat brush tip. When he came to highlighting the figures in he changed to a smaller brush. The yellow/white of the sunlight catching the shoulders arms and legs helped to throw the figures into the foreground. The pavement was lightened by a mixture of white and blue and the sky was worked in around the tower and roofs, using cyan, white and process yellow. When asked why the sky was not painted in first to make it easier he said that the tower would look cut out but he also liked to break rules and if 99% artists do it one way he will do the contrary! By now the painting was fully formed and astonishingly real despite the slashing, dragging and dabbing stokes. He told us that he had developed this method of painting through long years of hardship and he felt aggrieved when other professional painters stole his style. However he was happy to demonstrate to non-professionals or to art clubs. It was an inspiring session and Hashim was generous with his knowledge.

All were very impressed saying that Dupont should bring him in for a demo with the club. This is apparently being looked into. Enjoy the photos of him painting 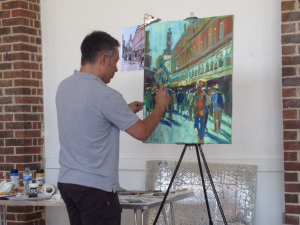 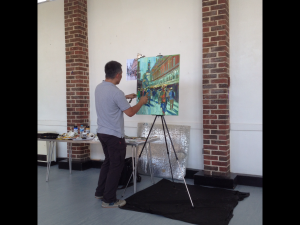 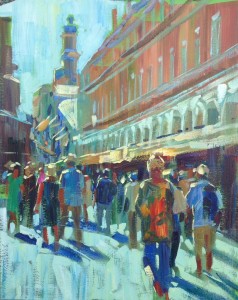