Caroline’s subject this week was “fish, painted in watercolour”. The vibrancy of the medium was well suited to this subject as can be seen in her beautiful rendition of a tropical fish.
First Caroline lightly outlined the fish in pencil then applied the fish scales and part of the body in a light tone. She carefully left some areas without paint to be filled in later.
The fish’s tail lent itself to some experimenting with use of paint. The tail was painted and then scored with the end of a paint brush to suggest lines and again some areas were left free of paint.
While the paint dried Caroline applied a viridian green loosely to the background to suggest water and reeds. Contrasting colour was used as opposed to considering tonal values at this stage, whereas later darker tones were used to enhance the body of the fish.
Finally the details were carefully painted in with a rigger and some of the white areas were washed over with a pale tone. Some of the painting was left to drip and flicking paint on the green gave it a watery feel. 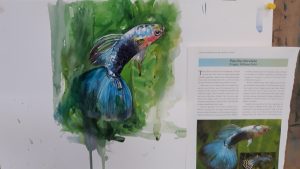 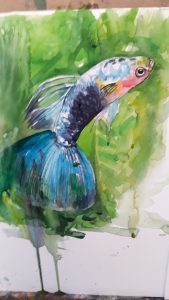 Thanks to Judy Richardson for photos and text.