Caroline began the session with a very interesting history of the Christmas card, which began in Victorian times. The first recorded was in 1843, with a very simple subject of two young people, obviously well to do, with no yuletide references. These cards were for the wealthy at that stage. There is no record of Father Christmas until 1907’ Moving through the decades, politics and fashion dictated the content. In the 1940’s the theme of absence and longed-for reunion prevailed, with so many being apart. In the 1950’s the American glamour girls appeared, along with versions of Norman Rockwell’s images of families enjoying material abundance.

We were then shown how to cut a Christmas tree out of folded cardboard and several examples of using strips of paper to build a tree on a card and other craft materials that could be used, such as buttons for baubles.

The next demonstration was on a square card, onto which Caroline , using water colours, painted a snowman in a blizzard. Using the rule of three, the image magically appeared, using water to splash into a wet blue sky for snow. The focal point of the greeting, which was on a billowing red scarf, finished a delightful card. 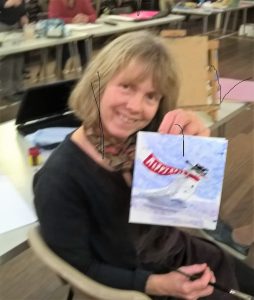