Using a photograph of a farmyard battle between two cockerels, Caroline introduced abstract painting with the concepts of non-objective, by which we express something from within, and objective, in which the artist paints their impression of a subject.

Caroline chose to begin with the tail feathers of the black & white bird, using bold strokes of black, which she later etched with the end of the paintbrush. Then, the opposing bird, which was ginger, was positioned using feathered strokes. A beak was added, and an angry eye! Pink dewlaps completed the confrontational element, which also gave the appearance of bloodied beaks.

Loosely painted the dribbled effects added to the atmosphere of aggression and fowl play! 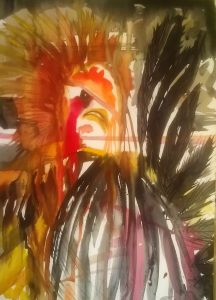