Caroline chose the two colours of sienna and ultramarine blue as they can be mixed in many different ways to give you both cool and warm colours.

The group selected this photo for Caroline to use as her inspiration. 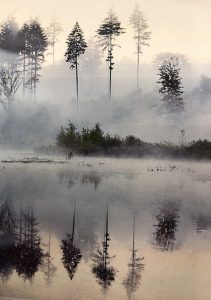 When starting a watercolour it is best to work from light to dark. Looking  at the picture, first determine where your lightest areas are.

Caroline was using White Knight watercolours and a large round  brush with a good point to it. She began using a dilute sienna for the sky and the reflection, and let this dry. She then mixed two shades of grey using both colours . She began to put in the tree line using the lighter colour. She used the brush in small  upward strokes moving along the tree line. Then she drew up the water in a horizontal stroke to avoid a harsh line. She went on to add a darker line underneath for more tonal contrast. You may need to revisit the darker area as it will dry lighter.

Once happy with the top part she went on to do the reflections carefully putting them in the correct position .Using a dry brush she put in some texture.

She put in the darker trees using a rigger for the trunks and finally the darkest trees .

She decided that the little island in the foreground would be the focal point, so she painted this in a warm tone using only sienna at first. She added some more sienna to the parts of the painting for cohesion.

She put in the ray of light by swiping a tissue in a diagonal line which was very effective.

Finally she put in a ghost wash to of ultra marine to add mood to the background. 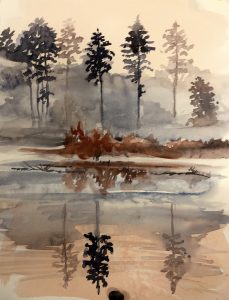